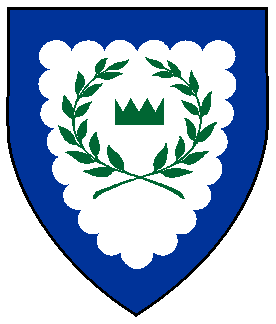 Greetings unto the populace of the West from Da’ud and Moira, Prince and Princess of the Mists:

Their Highnesses will also be holding the Mists Rapier Championship at this event, with tournament formatting to be updated shortly.

Due to the continuing uncertainty regarding the ongoing COVID Pandemic, we are requiring that either fighter or consort be a resident of The Mists. We also request each fighter/consort pair to declare their intent to Us prior to Coronet at royals@mists.westkingdom.org

The event will host the Mists Silver Muse Arts and Sciences competition: “Arts and Science though the Ages”.
This completion will be composed of two parts, one for early period, and one for later period entries.
The Early Period will be 8th century, and the Later Period will be 13th century. Artisans can create clothing, jewelry, stamping from the 8th!  Or sing a song, show a jewel from the 13th!
Documentation is required, but does not need to be elaborate. Silver Muse competition will contain a teaching element at some point, so why not start early and arrange a class.

For questions regarding the Silver Muse competition, or if you would like to teach a class, contact Lady Rue Payne at Rew@westkingdom.org or via FB messenger @RutheMiller.

Their Highnesses will also be encouraging populace participation for The Princess’s Social, Target Archery, and Games and Socializing on the Tourney Field on Saturday evening after the Tournament.

Watch for the signs pointing to the correct entrance gate/parking lot.